Article Category: All
The IT industry has more catchphrases, TLAs and clichés than you can poke a stick at. People in the industry like to throw them about like we’re feeding corn to chickens, and there is sometimes a bit of an arms race to see who can use the latest, whiz-bangiest, buzzy term – we are even worse than management consultants! 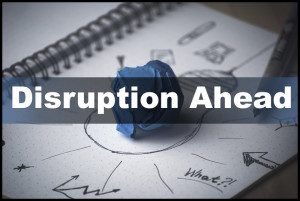 Mobile and BYOD. IoT. SaaS and Cloud (they are NOT the same thing by the way). Big data. SOA. Social media. For that matter, “Uber” as a generic way of inciting thought about changing business models. I could reel off another dozen without blinking but there is only so much space and time, and I want to start actually talking about some of them…

All of the above though are examples of what we could categorise together as “disruptive technologies”. That’s another catchphrase in itself that may mean different things to different people (well, all of the examples I listed are probably in that boat) but we use it to describe the application of current or emerging technology causing a dramatic shift in the way we work, play and to an extent think.

Of course, the idea that technology disrupts the economic and social fabric around us is hardly new. It’s unlikely that the first person to figure out how to carry around a small fire or fashion a round thing that could be used to more easily transport stuff and people thought much about the impact it would have aeons later. The Mongols scared the bejeebers out of Western Europe in the Middle Ages when they brought gunpowder to the attention of the armoured knights that for a few hundred years had commanded armies in Christendom, and forever changed warfare. In 1833 Thomas Carlyle wrote of what would burst onto the world’s stage in the 15th century and come to be called the printing press:

“He who first shortened the labour of copyists by device of movable types was disbanding hired armies, and cashiering most kings and senates, and creating a whole new democratic world: he had invented the art of printing.”

Talk about your disruption…

James Watt’s improvements on previous designs of the basic steam engine between 1763 and 1775 are widely accredited as THE pivotal accelerator of an 80 year-long global industrial revolution.

We have the evolution of internal medicine and surgical techniques over a thousand years, and the almost comically accidental discoveries X-rays and penicillin. The 1979 the WHO announced the official eradication of small pox in what was considered at the time the single greatest achievement in human history – after 12,000 years and countless hundreds of millions of agonising deaths and disablement.

The point is that “disruptive technologies” are the egg to our changing society’s chicken. Which came first is largely irrelevant – the co-dependence is a cycle that is completely self-regenerative. What’s fascinating about the times we are living in now, and that creates a startling point of comparison between these ‘inventions’ and my (incredibly shortened) list of contemporary disruptive technologies is the rate of change we are talking about. Knights in shiny full pate armour were still riding around on warhorses 200 years after the first cannons and then muskets made them irrelevant. Nobody really knew what to do with x-rays for 40 years, and it wasn’t until something as literally earth-shattering and global as World War II created a need for mass distribution of penicillin that it entered mainstream use. That was more than a decade after Fleming came in to work one morning in 1928, looked at some fungus growing in a petri dish and thought “holy moley, how am I going to clean that crap off?”

Contrast this with the iPad, which went from “yeah right, good luck with that mate” as the general industry comment when Jobs first released it in 2010 to over 270 million units sold* and its soon-to-be seventh generation only 5 years later. And that impact is even without looking at the resultant near extinction of the laptop (it has actually fought back well in the last 12 months or so) during that time, as well as the birthing of a whole new tablet and now ‘phablet’ technology format as a personal and business tool. These devices are so ubiquitous now, that they are well and truly entrenched in the cycle of technology evolution and societal change. And you can take your pick on which is driving which.

This website uses cookies to improve your experience while you navigate through the website. Out of these cookies, the cookies that are categorized as necessary are stored on your browser as they are as essential for the working of basic functionalities of the website. We also use third-party cookies that help us analyze and understand how you use this website. These cookies will be stored in your browser only with your consent. You also have the option to opt-out of these cookies. But opting out of some of these cookies may have an effect on your browsing experience.
Necessary Always Enabled
Necessary cookies are absolutely essential for the website to function properly. This category only includes cookies that ensures basic functionalities and security features of the website. These cookies do not store any personal information.
SAVE & ACCEPT
The #1 Thing Killing Your Manufacturing Business E-book

Tell us about your business and we’ll get the conversation started.